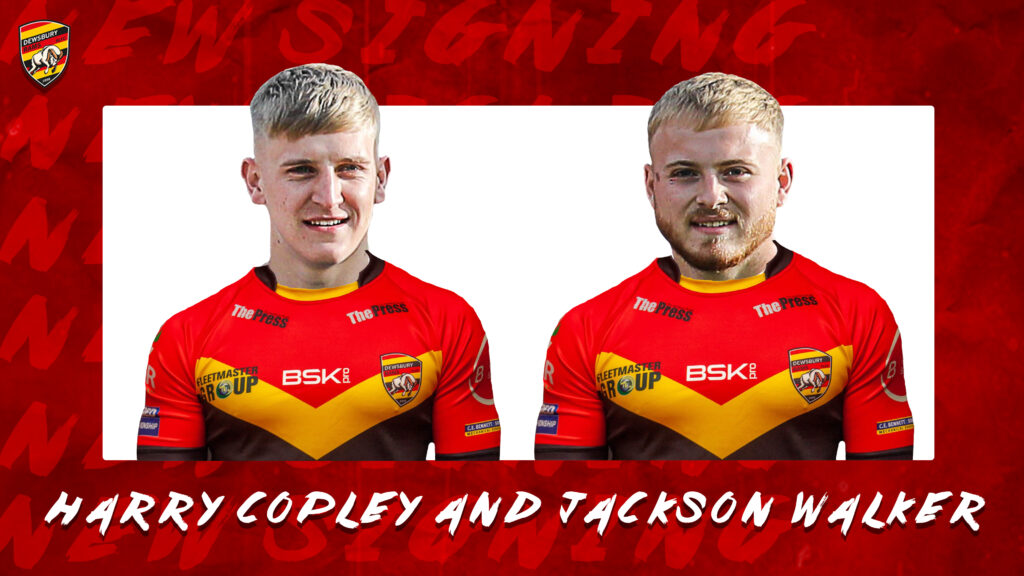 Dewsbury Rams can confirm the signings of young local amateur duo Harry Copley and Jackson Walker for the 2022 campaign.

Both players have been training with the Rams since late last year and each have done enough for the coaching staff to award them with contracts for next season.

Copley was announced last year at the 2021 Player of the Year Awards by head coach Lee Greenwood however did not feature in the penultimate game of the season against Oldham.

Meanwhile Walker comes from a family of former Rams with his father Matt Walker and uncles Patch and James Walker having previously donned the Red, Amber and Black.

Walker commented on signing with the club saying: “I am buzzing to have signed for next year, it has always been a massive ambition of mine to play Championship rugby and for it to be with Dewsbury where my dad and uncles have previously played makes it all the more special to me.

“After following the club as a kid I can’t wait for the chance to pull the kit on myself.

“I think the step up to Championship will benefit me massively. I have played open age since I was 16 so this is the next step for me now and being in a tougher environment will do me good and improve my game even more so with the experience in the squad to learn from.

“I can’t wait to get back into training with the boys and have a good season before kicking on into next year and hopefully I can get a few games under my belt.”

Copley echoed Walker’s comments saying: “I am very pleased to have signed with the Rams. It has always been a dream of mine to play professional rugby and with the Rams being my local team it was a no brainer for me to sign.

“I think I will learn a lot from the players around me and benefit from being around the professional environment but it will also be a massive challenge for myself but one that I am looking to take head on.

“I want to try and cement a spot in the first team, stamp my name on the game and hopefully see us in the play-offs.”

Head Coach Lee Greenwood commented: “Without putting too much expectation on his shoulders, Harry is one of the most talented players of any amateurs that we have brought into the system.

“He now has a very important pre-season to get stuck into which he has never had before but I would be surprised if we don’t see him figure in the starting lineup in 2022.

“Jackson is another talented local player with loads of potential. He has been training with us towards the end of last season and really impressed the coaching staff with his attitude and commitment.

“Amateur players can tend to struggle with the step up in intensity and commitment but Jackson has slotted in well and looks comfortable. Pre-season will be an eye opener for him but he has the raw ability to do well.

“He comes from a good Rugby League family and I like the fact that he has slipped under the radar.

“He has progressed through the ranks at Dewsbury Moor and done well as a young lad in the open age team rather than leaving at 16 to go into an academy system.

“There will be a lot to come from these two heading into next year.”