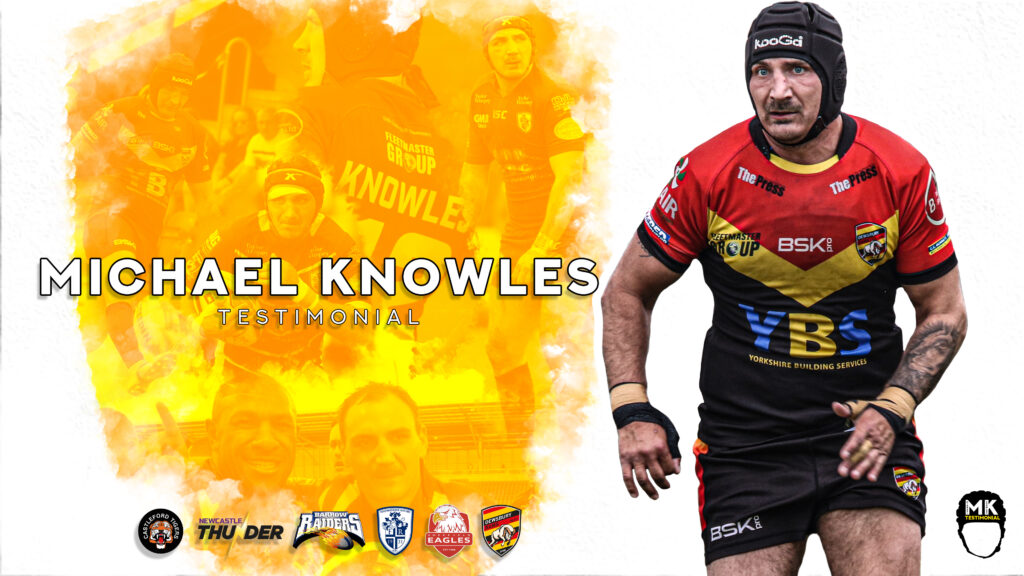 Dewsbury Rams is delighted to announce that Michael Knowles will celebrate his testimonial year with the club in 2022 as he heads into the 18th season of his career.

Knowles, 34, started his career at Castleford in 2005 before representing Castleford, Gateshead, Barrow, Sheffield and Featherstone before arriving at Dewsbury back in 2017.

Over the course of his illustrious career Knowles has made over 250 appearances.

On being awarded his testimonial, he said: “I am proud and honoured to have been granted a 12 month testimonial by the RFL.

“They do not just get handed out and there is a great list of players that have been granted one so I am ecstatic to be on that list and to have been given the opportunity to get a little bit back from the game that I have given my all to for the past 18 years.

“Supporters don’t get the chance to see behind the scenes and the sacrifices we as players have to take.

“No family holidays, missing important events and all the prep we have to do through the week to be game day ready really takes its toll.

“I would like to thank Ray Abbey and Viv Calvert for their efforts as without them this would not of been possible and I would also like to thank Mark Sawyer, Lee Greenwood, Ady Marsh and the rest of the club for supporting me.

“I hope that everyone will get behind me and support me in any possible way they could and once again I will repay the favour and give my all on the field for Dewsbury in 2022 – which could possibly be my last.”

Head Coach Lee Greenwood praised the second-rower saying: “Michael has been granted a testimonial by the RFL which is a testament for his services and longevity in the game.

“He has been a quality player at this level for a long timed still impacts games with his aggression and smartness.

“He is an influential character within our club and is well respected by the players in the changing rooms.

“For us to do well next season, we will need Knowles to perform well, which he has consistently done during his career.”

Rams Chairman Mark Sawyer added: “As Chairman of Dewsbury Rams I would like to say it has been a pleasure having Michael Knowles, or ‘Knozza’ as he is better known, as a player at Dewsbury Rams.

“He has always given us 100% effort and commitment and has put his hand up to play every week including times when he hasn’t been fully fit but when the team needed his expertise.

“He has been a true professional both at games, in training and interacting with supporters and sponsors and we are delighted to have had the use of his services.

“I am delighted that he has been awarded a testimonial by the RFL to recognise his time spent in the game and I know that he has given the same level of professionalism and commitment as he has shown at Dewsbury during the times he has spent at other clubs earlier in his career. He is a true role model.”

Knowles will have a testimonial match in the new year and a range of special events throughout the season that will be announced in due course.

Supporters will be able to keep an eye on the club website and across the club’s social media platforms for further details and when they are announced.