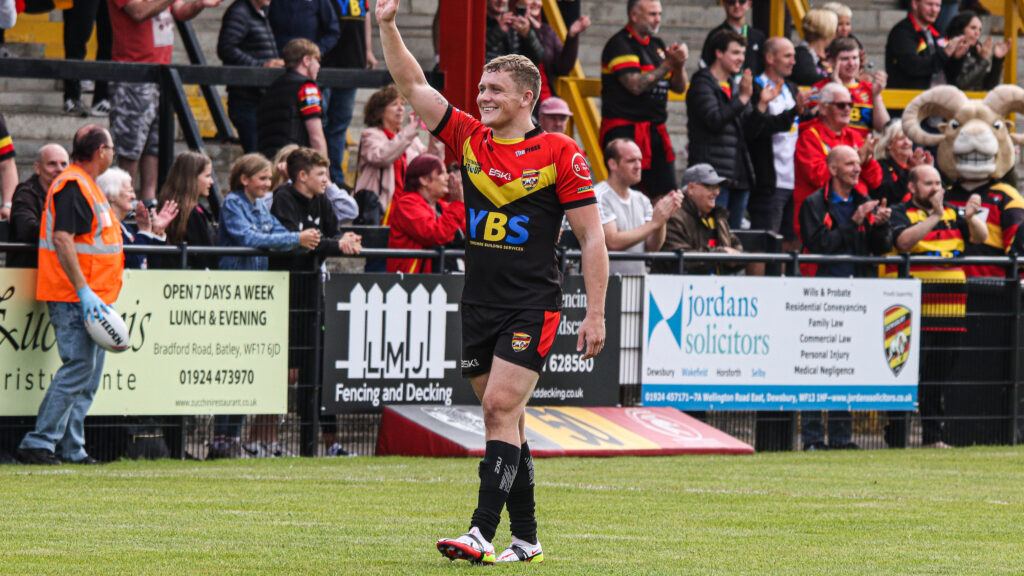 Alex Smith has put pen-to-paper on a new one-year deal that will see him stay at the Tetley’s Stadium until at least the end of the 2022 season.

Having come to the Rams as a trialist early last season Smith did enough for head coach Lee Greenwood to award him with a contract.

However, with injuries having plagued his Dewsbury career so far, the young halfback will have the opportunity to force his way into the Rams starting line-up next season after Liam Finn announced his retirement at the end of last season.

Smith, who’s shirt sponsor is We Do Tennis Ltd, was delighted to have signed a new deal saying: “I am made up to have signed for another year at the Rams. I am really looking forward to getting back in with the lads and having a full pre-season, hopefully picking up from where we left off.

“It was a pretty easy decision for me to extend my stay to be honest. I think after signing on trial last year and then doing my MCL it would have been easy for Lee Greenwood to get rid of me straight away.

“Luckily, he did the exact opposite of that and it filled me with confidence and I wanted to show some loyalty and respect by going again with the Rams.

“Overall this year was not the season we had hoped for as a squad but the last three wins in 2021 showed that we can put the performances together but we were just disrupted massively.

“For me personally it was not the greatest season as I picked up multiple injuries throughout, but I was also not expecting to play any games, so to have played the amount I did made me realise I can cut it at this level so I am hoping to get into pre-season fitter, faster and stronger.

“I want to start the season on the front foot and repay the coaching staff, the fans and my team mates for sticking by me and give them the best version of myself.”

Lee Greenwood reacted to securing the services of the young halfback for another year saying: “Alex has been a real find for us. He initially joined on trial last November and he has gotten better as the weeks have gone by in training.

“He impressed in the friendly against Batley Bulldogs and his potential along with his commitment led to us signing him for the season.

“He has had an inconsistent year in regards to injuries but each time he came into the side he showed some glimpses of real quality.

“He has areas to improve on but he should be happy with what he has done this year and there is plenty more to come from him.

“He will return to pre-season training a different player to the one that started with us last year and he now has a chance to cement a place here as a starting halfback for years to come.”