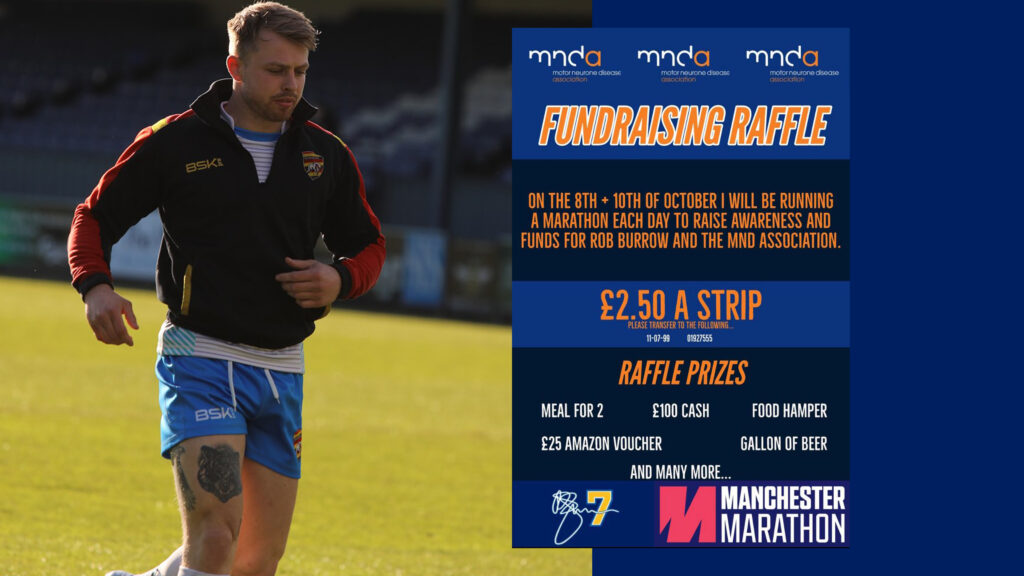 SAM Day is set to run two back-to-back marathons in aid of the Rob Burrow Centre for Motor Neurone Disease that is set to be built in Leeds City Centre.

A raffle will be held during the interval of the Player of the Year Awards tomorrow evening where fans can purchase raffle tickets at £2.50 each or a set of five for £10.

There are a range of prizes available to win including a £25 Amazon gift voucher, a hamper filled with treats, £100 cash and signed jerseys from the teams at Dewsbury Rams, Leeds Rhinos and Wakefield Trinity.

“So in just over three weeks I’ll be taking on a massive challenge in running two marathons back-to-back to help raise funds for the Rob Burrow MND Centre that is set to be built in Leeds.” Said Sam Day, who is sponsored by Blindside Johnny.

“Rob Burrow was always one of my favourite players growing up and always gave me belief that I could play rugby because, like him, I was never the biggest.

“I think a lot of people didn’t know much about Motor Neurone Disease before following Rob’s story and what a cruel disease it is myself included, so if anyone can even buy just one raffle ticket and support my fundraiser I’m sure it would go along way.”

Leeds Hospitals Charity launched the appeal in the hopes to raise £5 million in order to build the centre in the heart of the city: ” By donating to our appeal, you can support the creation of the bespoke centre at Leeds Teaching Hospitals NHS Trust, which will see MND services housed under one roof for the first time.”