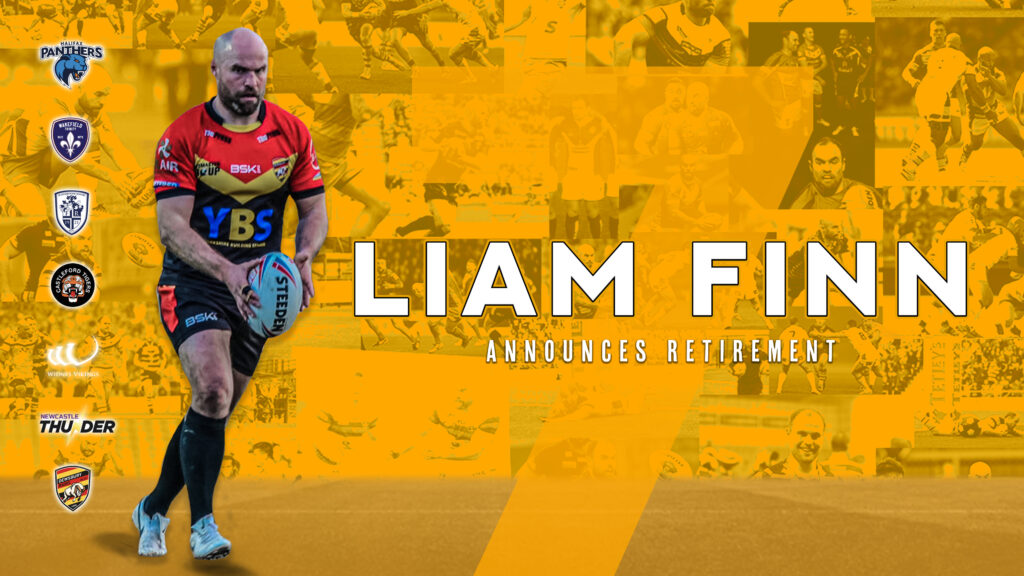 LIAM Finn has announced that he will be retiring from rugby league at the end of the Betfred Championship season after an illustrious 19-year professional career.

The half-back’s final game will be held this Sunday as Dewsbury face off against Oldham RLFC in the penultimate game of the season at the Tetley’s Stadium.

The 37-year old, who has enjoyed two stints with the Rams, has also appeared for a number of clubs including Halifax, Wakefield Trinity, Featherstone Rovers, Castleford Tigers, Widnes Vikings and Newcastle Thunder over the course of a playing career, which has spanned across almost two decades.

A veteran, with more than 450 career games to his name, Finn has also captained his country making 32 appearances for Ireland on the international stage.

Finn has been with the Rams for his second stint at the club since 2019 and his head coach has praised the dedication that he has given to the sport.

“Liam has been a class act for a long time. To influence games in the way he has for such a long time speaks volumes of him as a player and as a person,” Lee Greenwood said.

“He has been a credit to himself and his family throughout his long career and it is a pleasure for me to call him a good friend.

“He was never the biggest, strongest or fastest as a young lad growing up and would watch other lads around him get signed up to professional clubs but having coached him for a season at Siddal when we were both young, you could see the qualities he brought to a team even then.

“He has always played the game as a ‘coach’ on the field and although his legs have never gone that fast, his rugby brain allowed him to be a play or two ahead of everyone else.

“He is exactly the player a coach would want as their number seven and I have lost count the number of times people have said to me they need someone like him in their team.

“He has been carrying numerous injuries for a lot of the games this season but would always put his hand up to play. After a bit of a lay off he has rolled back the years in his last two performances.

“The players around him won’t realise how good he has been to train and play alongside until he’s gone.

“I wish him all the best in the future and I really hope that in some capacity he will stick around in rugby league.”

Finn commented on his retirement saying: “I feel as though I’m ready to finish now because this year has been the first time ever that I’ve lost a bit of the enjoyment you need to get the best out of yourself.

“The sacrifices that you make to be a pro or semi-pro player started to outweigh my desire and I just knew I couldn’t give it my all anymore.

“I’ve had a great time throughout the course of my career and made some good friends and I appreciate all the opportunities I’ve been given through the sport of rugby league.

“I’ve had some great times at most of the clubs I’ve been at and I think I’ve done a decent job in whatever role I had in any team. I  hope I was a good team mate to play alongside and if I was I’m more than happy with that.

“It will be nice to finish at home with Dewsbury this weekend as it was the place where my career started to really get going and felt I matured into a proper first team player here.

“I’ve got no major plans for retirement but I want to spend more time watching my kids play sports or whatever else they want to do and I think my partner Laura will appreciate having me around to help a bit more.”

YOU can be there to bid Liam Finn farewell this Sunday when Dewsbury Rams take on Oldham RLFC in the final game of the 2021 Betfred Championship season. Ticket prices are frozen for both adults and concessions at just £10, which you can pay online or on the day, whilst all juniors go absolutely FREE.