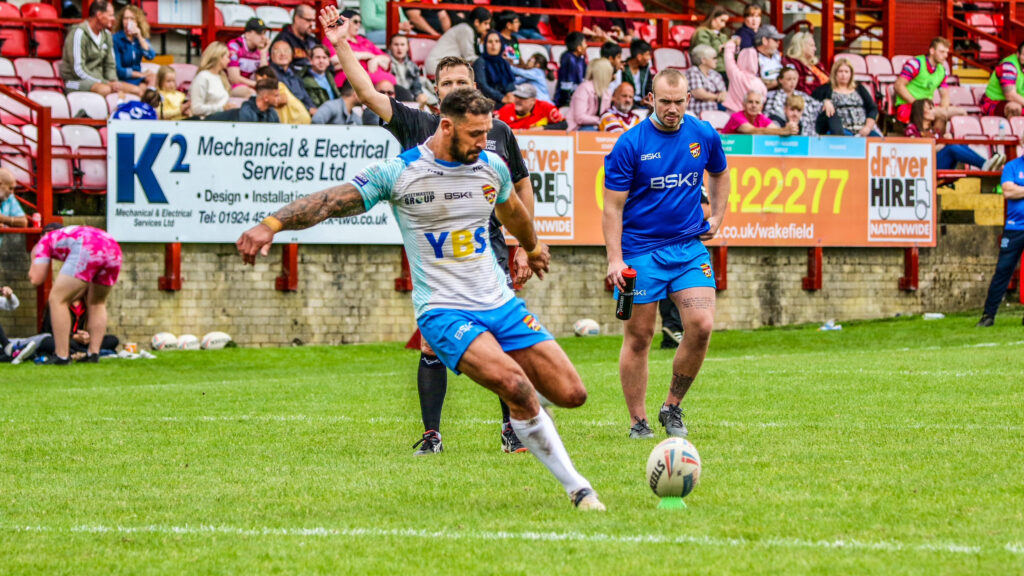 Paul Sykes reached a career milestone of 2,500 points as he helped Dewsbury Rams to a 31-24 triumph over local rivals Batley Bulldogs in the Heavy Woollen Derby.

The victory was the Rams’ second consecutive win following last week’s success at Sheffield and is the first win at the Fox’s Biscuits Stadium since August 2015.

The visitors were bolstered by the return of several players, including long-term absentee Adam Ryder, who restored his long-standing partnership with Andy Gabriel.

The Rams survived an early scare when Matty Fleming was unable to take a high kick, under pressure from Luke Hooley, before a frantic Batley offload was gathered by Gabriel.

But minutes later the Bulldogs did take the lead following a Dewsbury error.

Ben White attacked the line and marched forward as the visiting defenders waited for the pass, before eventually smuggling the ball down next to the posts. Tom Gilmore converted to make it 6-0.

The hosts chased another score when Hooley gathered White’s kick, but the Bulldogs were penalised for offside.

Errors and ill discipline were beginning to creep into the Rams performance inviting more home pressure.

Lewis Carr’s midfield break offered some relief for the Rams and soon after there seemed to be a shift in momentum.

After 15 weeks on the sideline due to injury, Adam Ryder scored off the back of some good attacking play.

Fleming produced a superbly weighted kick, which Gabriel batted inside for his centre partner who charged over. Sykes’ conversion from the touchline was befitting of the try as the Rams went level with just under half of the first period played.

Proceedings got even better for Greenwood’s side as Tom Garratt’s superb break laid the platform for Liam Finn to dummy his way over from close range.

The back-to-back scores appeared to spring the hosts into life and sustained pressure would follow, forcing the visitors to kick from deep at the end of their sets.

The cause wasn’t helped when Jon Magrin was sin-binned for a spear tackle close to the Rams line, and the hosts wasted little time in making their numerical advantage count.

Quick hands found George Senior in enough space to reach over and plant the ball down. Gilmore’s goal levelled matters once more.

The Bulldogs scored another in quick succession after a right edge play produced a score for Kieran Buchanan, with Gilmore and Hooley both involved.

But the Rams once again bounced back in superb style as Gabriel scored acrobatically in the corner off the back of a cross-field kick from Finn. Sykes’ touchline conversion squared the contest once more.

And the veteran half-back would ensure the visitors headed into the sheds in front, hammering over a drop-goal as the hooter sounded.

The Rams made the perfect start to the second half as the Bulldogs allowed Sykes’ kick-off to bounce dead, and were then pegged behind their try line for a drop-out.

And the visitors went close to adding to their lead when Garratt charged low for the line, but he spilled the ball in the act of scoring.

It merely delayed the inevitable, however, as the Rams prop charged onto Sykes’ short ball and showed tremendous speed and power to march over.

Sykes’ goal made it 25-18 and marked a momentous occasion for the Dewsbury-born halfback as he scored his 2,500th career point.

The Rams continued to push and Carr was agonisingly close to extending the visitors’ lead after collecting Finn’s cross-field kick.

The Bulldogs rallied and found an extra level of intensity in the minutes that followed, but the visitors responded in kind to preserve their advantage.

Finn produced a crucial intercept to prevent Toby Everett from crossing as Batley attacked, but he was unable to gather the ball, inviting more pressure.

More heroic defending held the hosts at bay, though the pressure continued.

The Rams were forced to drop-out as the hour mark passed before A coming-together between Sam Day and Everett resulted in Day being sent from the field.

But again the Rams rallied, showing superb resilience to reshuffle and keep their opponents out, who by now were enjoying the majority of possession and territory.

The visitors reaped the rewards for their huge defensive efforts when Jordan Schofield produced a determined drive from short range that saw him ground the ball under a pile of defenders.

Batley gave themselves hope when Jodie Broughton snuck in on the overlap but it could be only seen in consolation.

The sound of the final hooter sparked jubilant scenes on the terrace at the foot of the Mount Pleasant slope as the Rams supporters celebrated the 31-24 victory.