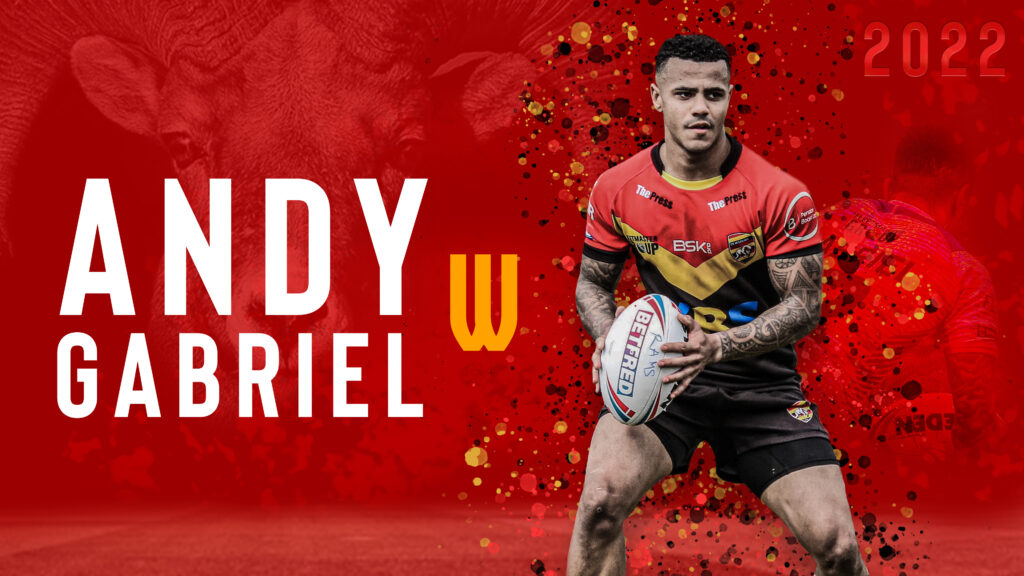 DEWSBURY Rams are thrilled to announce that Andy Gabriel has agreed a one-year deal with the club for the 2022 Betfred Championship season.

Gabriel, 27, joined Dewsbury back in 2019 from Keighley Cougars and has been a standout player for the club over the past three years on the Rams’ right edge.

Commenting on the new contract, Gabriel said: “I am really pleased to have signed for next season, I feel like I have really settled here in Dewsbury and in the Championship, so it was a really easy decision to extend my time with the club.

“This year has been a disappointing one, there can be no denying that, but I am already looking forward to next year as we will get the chance to right a few wrongs.”

The prolific winger is the club’s top try scorer and has currently scored 12 tries this season in all competitions.

Looking ahead towards next season, Gabriel has made clear his ambitions for 2022 and has stated he wants to improve further during the off-season, off the back of some quality performances this year.

He said: “Hopefully I can keep getting over the line but more importantly I want to stay consistent. This year I feel like I have not always made the right decisions in defence, so that will be an aspect I want to be improve on heading into pre-season.”

Head Coach Lee Greenwood added: “In a season of ridiculous disruption and inconsistency, Andy has been a shining light.

“He has improved each season since joining the club and in my opinion is now one of the best wingers in the Championship.

“We made the difficult decision two years ago to let other more experienced players in his position go, in order for him to come into his own, and I believe he has done just that.

“For a team that has struggled to score points this season he has found his way to the try line more than could be expected and his overall game is now of a high standard every week.

“We are really pleased he has decided to remain at the club next season amid plenty of interest from other clubs.”

Gabriel’s shirt sponsor is Rams Against Racism whilst his socks and shorts and socks sponsor is Nathan Hirst.