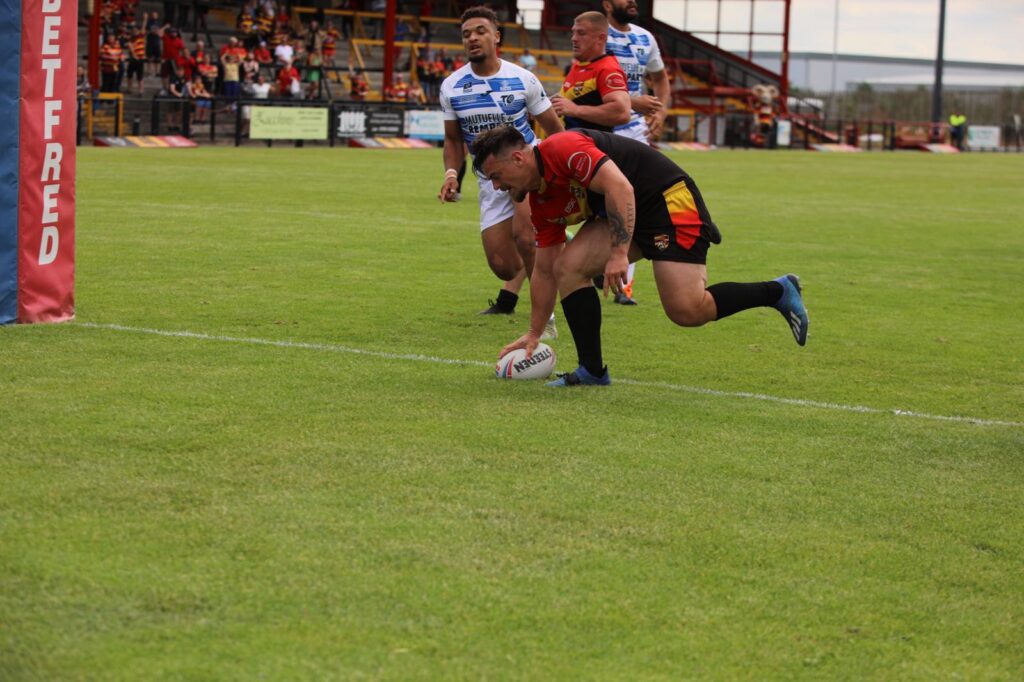 Dewsbury Rams were defeated by Toulouse at the Tetley’s Stadium on Sunday afternoon.

The full time French outfit were just too strong for the Rams in what was still a battling performance by the home side.

The first try of the game came on the 5th minute when Mathiue Jussaume crossed the line. Mark Kheirallah missed his first conversion attempt. The score stood at 4-0 to the visitors.

A minute later the French outfit scored again with Jy Hitchcox going through to score. Kheirallah again missed his kick making it 8-0.

Their next try came on the 19th minute when Eloi Pellisier scored. Kheirallah this time did convert the kick to make it 14-0 to Toulouse.

The Rams came close to scoring their first try on the 21st minute. It looked like Lewis Carr had got the ball down before being pushed out of play, but not to be.

On the 33rd minute Mitch Garbutt powered his way over the line to score. Kheirallah converted the kick to make it 20-0.

Kheirallah also converted a penalty kick on the 38th minute to make it 22-0.

Dewsbury scored their first try of the game on the 46th minute. Alex Smith crashed over the whitewash to score. Michael Knowles converted the kick to make it 22-6 to Toulouse.

The visitors then went on a scoring spree, notching tries on the 52nd minute (Sangare), 62nd minute (Jussaume), 67th minute (Pellisier), 73rd minute (Hitchcock) and 76th minute (Pezet). Kheirallah managed to convert all but one of the following kicks.

The Rams ended the game with a try of their own when Will Oakes found a gap and exploited it. Paul Sykes converted his kick leaving the final score 12-56 to Toulouse.