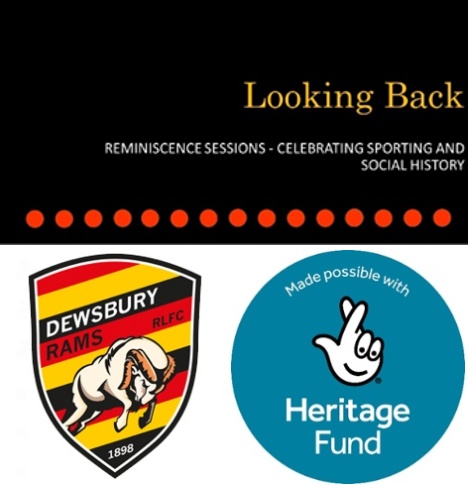 Today, Looking Back CIC received a grant from The National Lottery Heritage Fund of £95900, for an exciting project, Dewsbury Heroes. The project, developed in conjunction with Dewsbury Rams, focuses on the history of Dewsbury Rams Rugby League club from its origins to the present day.

Thanks to National Lottery players, Dewsbury Heroes will record, preserve, and celebrate the history of Dewsbury Rams Rugby League club, from its inception in 1898 through its glorious early years to its modern renaissance as a progressive community-based club, by running a two-year heritage project which will engage the local community, former players and supporters alike.

Dewsbury Rams Rugby League Club has played an important part of the history of the town.  It has relied on local people to play, officiate and support over the years and we want to use this project to tell that story and bring it to life for local people by working with current supporters of the club and its former players/ officials. We intend to tell the story in a digital museum, celebrate the history of the players by awarding heritage numbers and create some permanent displays sharing the history of the club, recording oral histories and develop dementia friendly environments.

Looking Back CIC has created a network of rugby league reminiscence clubs, supporting anyone with a memory loss condition and/or suffering from social isolation. We run face to face, virtual and hybrid sessions every week with rugby league clubs across the country – having launched our first ever club at Dewsbury in 2019.

Commenting on the award, Mark Sawyer, of Dewsbury Rams said:  The National Lottery Heritage Fund grant is a fantastic award for Looking Back – working together with Dewsbury Rams we will be able to create a virtual museum and exhibition which celebrates the rich and varied history of our club and celebrates the players who have worn the red, amber and black of Dewsbury over the years.  The project is exciting and will bring to life the continuing history of Dewsbury Rams Rugby League for a new audience as well as our long-standing loyal supporters.