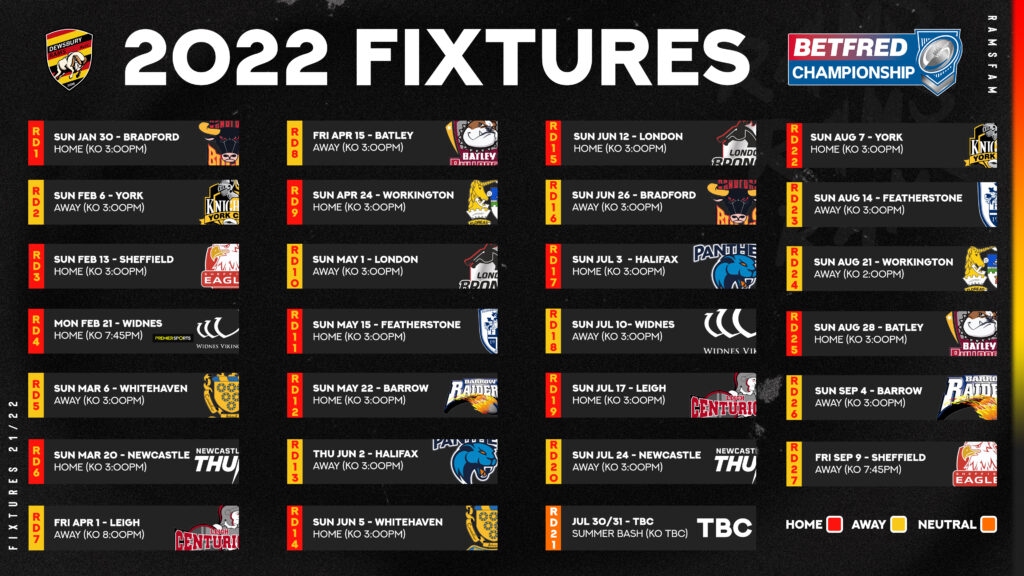 Dewsbury Rams are excited to announce the fixture details for our 2022 Betfred Championship campaign which will see us get underway at home for the third season in a row.

The Rams will kick off the Betfred Championship season with a home game at the Tetley’s Stadium on Sunday 30th January before heading to the LNER Community Stadium on Sunday 6th February as we face York City Knights in Round Two action.

Round Three sees the Rams return home to face Sheffield on Sunday 13th February and the following week Monday Night Rugby League comes to the Tetley’s Stadium as we face Widnes Vikings broadcast live on Premier Sports with a 7:45pm kick off.

The first Heavy Woollen Derby will take place in April on Good Friday, 15th April, at the Fox’s Biscuits Stadium where we face local rivals Batley Bulldogs to earn bragging rights for the first time in the new year.

The week later we invite newly-promoted side Workington Town to the Tetley’s Stadium on Sunday 24th April at 3:00pm.

We take a visit to the Shay Stadium on Thursday 2nd June to face the Halifax Panthers on a Bank Holiday afternoon at 3:00pm.

The end of July sees the return of the Summer Bash in Blackpool with information on the weekend still to be confirmed.

The Rams end their campaign against Sheffield on September 9th under the Friday night lights as the Eagles return to Olympic Legacy Park with kick off at 7:45pm.

Full details of fixtures for the 2022 Season can be found below: