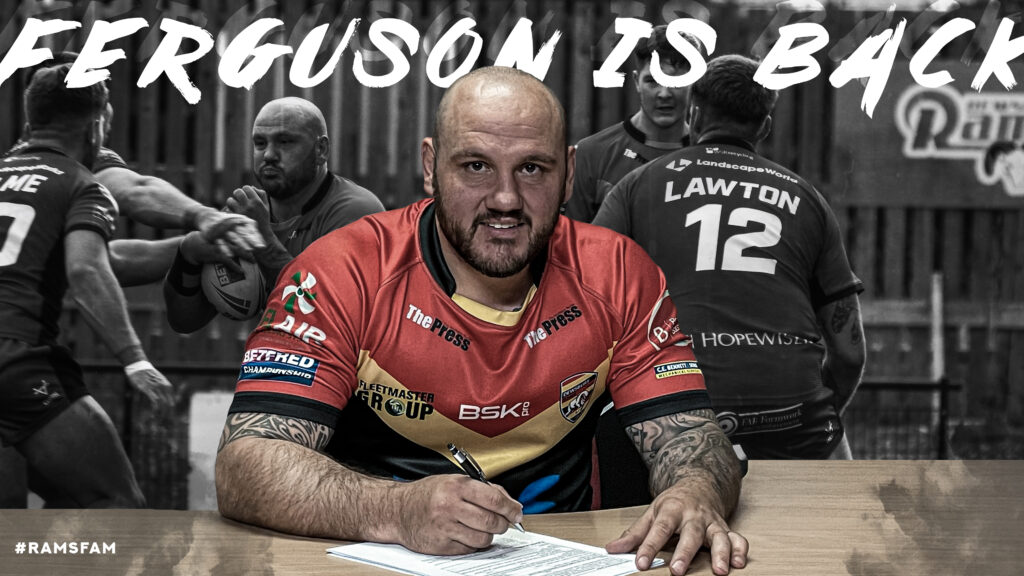 Dewsbury Rams are delighted to have secured the signature of Dale Ferguson who has signed a one-year deal with the club.

The former Huddersfield Giant appeared on loan for the Rams from Featherstone Rovers last season in the 23-22 victory over Widnes Vikings where he made an impact scoring a try on debut and leaving a lasting impression on supporters at the Tetley’s Stadium .

He now returns to the Rams on a permanent basis having signed a one-year deal and is looking ahead to a massive 2022 season representing the Red, Amber and Black.

“I thoroughly enjoyed my time at the club when I played on loan last season and when the opportunity came about to sign on a permanent basis I just had to grasp it.

“I was unlucky at Featherstone having dealt with a fair few injuries but I enjoyed my time there overall.

“I have been around for what feels like quite a while and with the Rams having quite a young pack I hope to get in with the guys and play alongside them knowing that I have the experience behind me.

“The game I played in last year against Widnes was awesome and I really enjoyed my time when I came across to the club.”

Lee Greenwood commented: “This is a huge signing for us and we are really happy that Dale has joined the club.

“It should be a big confidence boost for everyone associated with the Rams that he has chosen to sign with us amid plenty of interest from a number of clubs.

“We saw first hand how good of a player he is when he came on loan from Featherstone last season and then again the following week when he played against us.

“In the very short time he was with us, Dale really enjoyed himself and he made a great impact on the players around him in the changing rooms.

“He adds some considerable size, experience and quality to the squad we are building and I am sure he will be a fans favourite next season.”