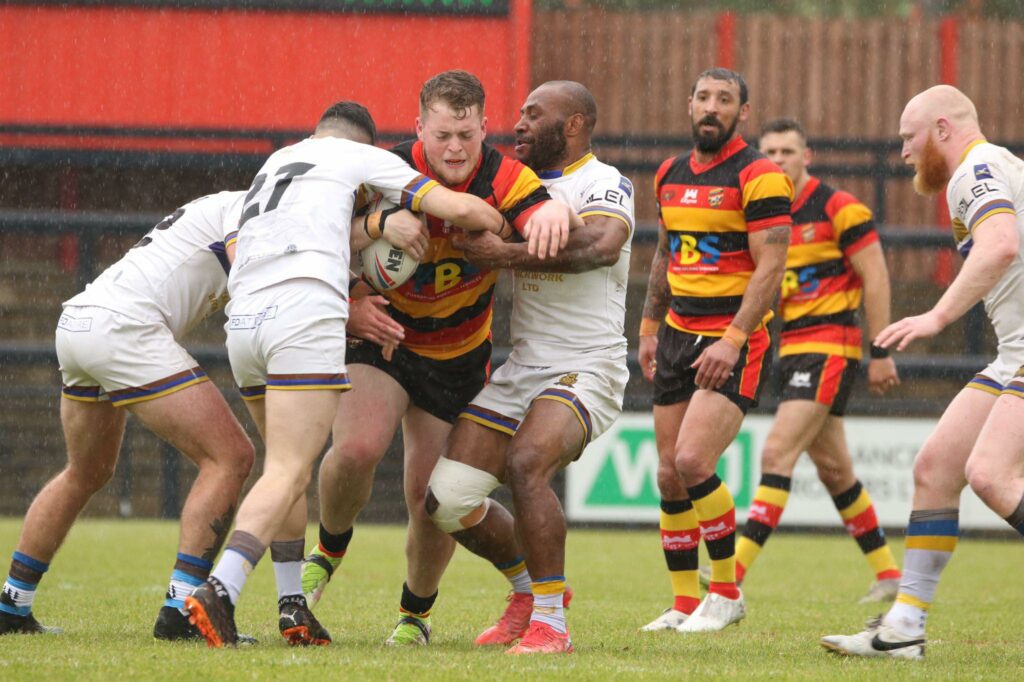 Whitehaven score three unanswered second half tries to claim a comeback victory over the Rams on a miserable Sunday afternoon at the Tetley’s Stadium.

In the first of two huge home games in the space of week, the Rams were looking to pick up a victory against Whitehaven who were just one place above them in the table and lost heavily on Thursday afternoon against Batley.

The game started in a tense fashion given the wet conditions with both sides exchanging penalty goals early on. The first try of the game was scored by Andy Gabriel who slid into score following a grubber by Michael Knowles. The Rams were piling on all the pressure after that, but it was Whitehaven who were next to score when Andrew Bulman intercepted a pass on his own ten metre line and went the length of the field to score. The conversion which followed, gave the away side a two-point lead.

Despite being behind after twenty-seven minutes, it was the Rams who had all the pressure for the remainder of the first half, Adam Ryder was held up over the line but then scored shortly after from close range. Then just before the half time hooter, the Rams went ten points clear after a lovely looping pass from Matty Beharrell was caught by Andy Gabriel who went over for his second of the afternoon.

The Rams started the second half much as they finished the first looking to put pressure on the Cumbrian side but two moments were to come which changed the game in the favour of the away side. Firstly, Reiss Butterworth was sin-binned for a professional foul (offside) followed shortly after by a Yellow Card for Paul Sykes, again for a professional foul (interference off the ball).

Despite some good defending whilst down to eleven, the pressure by the away side eventually took its toll on the Rams. Firstly, Ryan King managed to control a widely bouncing ball to score to bring Whitehaven within four and shortly after Dion Aiye scored to put them in the lead.

As the game was coming to an end the Rams tried in vain to get the score to put them back in front, but it was Nikau Williams who scored the final try for the visitors when he threw a dummy close to the Rams line, to confirm his side’s win.

After the game Interim Head Coach Paul Sykes said, “That was a tough one to take, I thought we had as near perfect first half as we could’ve done. If we could’ve gotten over early in the second half then we could’ve put the game to bed, but we seem to just shoot ourselves in the foot. It’s hard to defend when you’re down to eleven/twelve and they got a head of steam and we couldn’t claw it back.”

“If we can put two halves together like the first one, then we won’t be far off. We’ll keep working hard though and we’ll go again next week against London.”

Another huge clash coming up for us next week as we return to the Tetley’s Stadium next Sunday (12th June) to take on London Broncos.