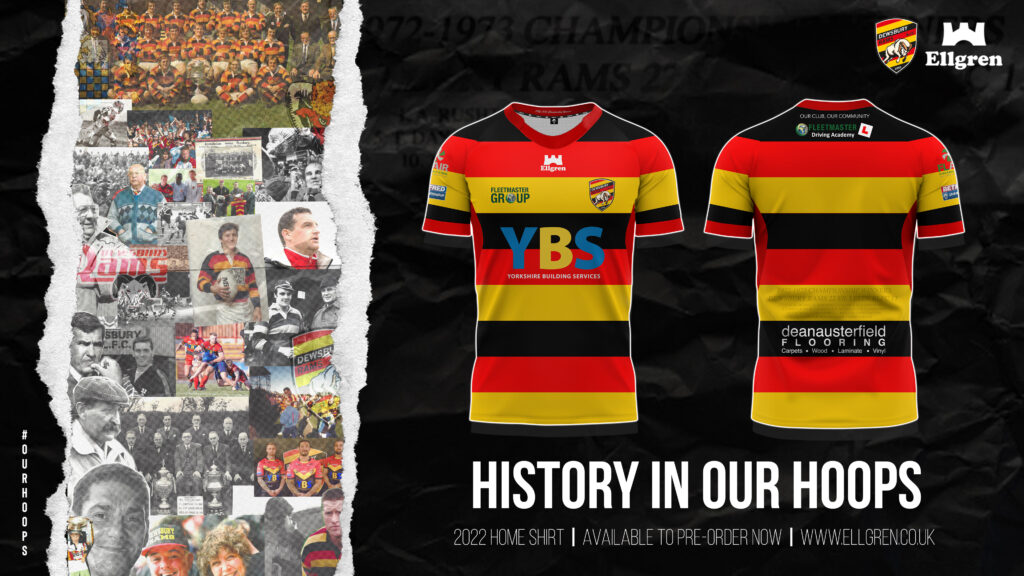 Dewsbury Rams are delighted to unveil our 2022 Home Shirt, which sees a return to the traditional hoops for which the club is famous.

The new design is available to pre-order through our apparel partners Ellgren online now!

There is plenty of history in our hoops which return for the 2022 season. The shirt features the names of the 1972/73 team and pays homage to win the League Championship Final where they ran out 22-13 victors against Leeds RLFC.

The kit features our 2022 shirt partners, who will be familiar to Rams supporters as long-standing partners of the club.

Yorkshire Building Services, the club’s principal partner, continue to be feature as the main front of shirt sponsor while Fleetmaster Group are once again featured on the right chest as well as the upper back

Flair Handling Systems return as the right sleeve sponsor while Dean Austerfield Flooring returns towards the bottom below the shirt’s most prominent feature – the names of the winning squad, which have been sublimated into the design.

The 2022 home shirt is available to pre-order now and the first chance to buy will be at the Season Launch Night on December 10th where the Rams’ 2022 Away Kit will be revealed.

Ellgren Director, Jonathan Schofield, a former Rams player and remembered fondly as the coach that led the Rams Reserves team to Championship glory in 2015, was excited to bring the traditional look back to the club.

He said: “We are delighted to have worked closely with the club on the design of this traditional shirt.

“To be able to take it back to the hoops of the 72/73 team and bring the heritage back to the club is something we are really proud of and we are confident that it will prove popular with the Rams fans.

Dewsbury Rams Chairman Mark Sawyer commented on the traditional shirt saying: “I was delighted when the team at Ellgren came up with the design for the 2022 home shirt.

“Dewsbury Rams are a club with a long and distinguished history and the colours of red, amber and black are very much a part of that.

“The 1972/73 season was the year that the clubs’ colours received national recognition with the Championship win and we are delighted that fifty years later we are able to pay homage to that team and to their achievements with a return to a traditional hoop design which we hope will prove to be a winner with our supporters and a real boost to the retail offer that our apparel partners Ellgren are now providing.”