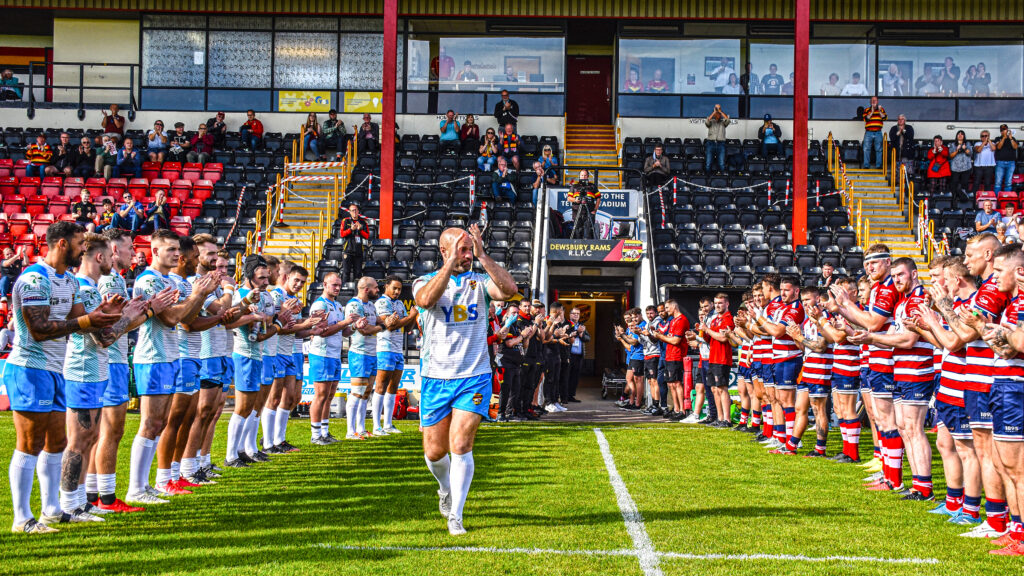 Dewsbury Rams sent Liam Finn into retirement with a third consecutive win, after coming from behind to beat Oldham RLFC 21-14 in the final game of the season.

Finn hangs up the boots following a distinguished career that has included spells in Super League and at international level, while Tom Garratt and Matty Fleming also made their final appearances for Dewsbury.

Dewsbury enjoyed the first attacking chance, building pressure after Oldham sent a kick on the last out on the full, followed by Paul Sykes producing a fine tackle to push the visiting ball carrier off the field.

Adam Ryder was inches away from scoring after Sykes’ crossfield kick was fumbled, but the hosts got the ball back after a drop-out was forced.

The Rams continued to enjoy the lion’s share of possession and they got their just rewards in the 10th minute when the energetic Matty Fleming broke through the line and found Lewis Carr on the left edge. Sykes was just wide with the conversion attempt, leaving the score at 4-0.

OIdham threatened a response when Ryan Ince broke in front of the North Stand, but the chance was gone when Max Roberts put far too much on his attempted chip on the next play.

The Roughyeds continued to build pressure, but the hosts were up to the task, forcing errors and keeping their tryline intact throughout the first quarter.

Dewsbury went further in front when Finn and Fleming combined to send Ryder over just inside the right touchline.

Sykes’ attempt at goal bounced back off the post, restricting the advantage to 8 as the game approached the second quarter, before the Roughyeds hit back with a nicely worked try from a Lewis Charnock kick.

Charnock collected his own bomb and then fed the ball right for Dan Abram, who had an easy walk-in.

Abram converted his own try to make it 8-6, and Oldham were quickly back in search of another score, but smart work from Ryder defused a Harvey Spence grubber.

By now, the momentum was with the visitors, while the Rams were struggling to get out of their own half.

Finn’s crossfield kick, easily gathered, was as close Dewsbury got in the minutes that followed, and it would be the Roughyeds who’d steal the lead just before half-time.

Charnock’s kick was not dealt with, and Ince recycled the ball into the hands of Danny Bridge, who had an easy run across the line. Abram’s goal made it 8-12 at the interval.

A great cross-field kick from Sykes was snapped up by Gabriel, as the Rams started the second half brightly, but his grubber inside was just beyond the chasing Ryder, and Oldham recovered.

Oldham notched the first points of the second period when Abram struck a penalty goal, establishing a six-point cushion, after the hosts were penalised for a late tackle following a knock-on.

The concession sprung the Rams into action, and an attacking platform was set, but wasteful play on the fourth and fifth tackles saw Lee Greenwood’s side come away with nothing.

A Speakman interception ignited hope of a try in response for Dewsbury, but his pass inside for Gabriel was well-scouted by the scrambling Oldham defenders, who forced a knock-on.

Abram threatened a third score for Oldham, but desperate defence from Fleming forced him into touch as he sprinted down the South Stand side.

The Rams applied more pressure of their own and spent several sets camped on the visitors’ try-line, but they were unable to find the spark required to breach Oldham’s defence.

On more than one occasion, the ball was lofted right for Gabriel, who more often than not found a palm back or caught possession, but the Roughyeds were alert to the danger each time.

Michael Knowles juggled the ball before knocking on close to the try-line as Dewsbury continued to press, and they eventually got their spoils when a neat short-side play put Ryder over in the right corner.

Sykes’ superb touchline goal levelled matters, before the veteran half-back stepped up to hit a drop-goal minutes later, receiving the switch pass from half-back partner Finn on the fifth tackle.

There were ugly scenes just shy of full-time after Oldham were penalised for a dangerous tackle. Speakman saw yellow for the Rams, who won the penalty for the original offence.

And on the final play of the game, Sykes’ pinpoint kick was snapped out of the air by Knowles, who dotted down to seal the two points and complete an end-of-season hat-trick of wins.