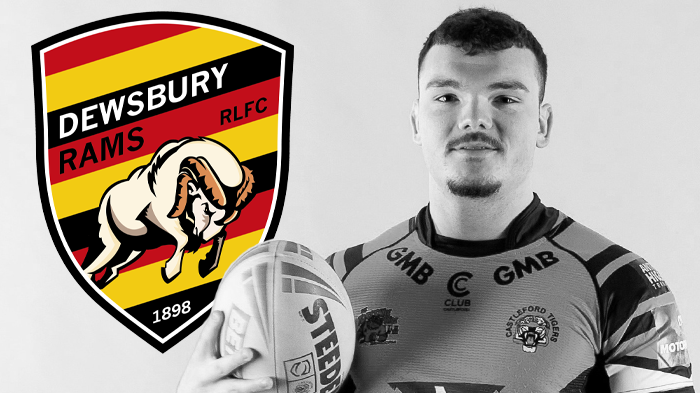 Dewsbury Rams is pleased to announce the signing of second rower or centre Robbie Storey.

Storey joins the Rams on a deal until the end of the season, after most recently playing for AS Carcassonne in the French Elite One competition.

The 21-year-old was previously on the books at Castleford Tigers, earning a two-year full-time contract with the club in 2018.

His progress was halted by the suspension of matches last year and he crossed the channel to continue his career, making 17 appearances as part of a successful Carcassonne side.

Storey is a former West Hull junior player and has represented England at youth level.

The new Rams recruit believes the move to The Tetley’s Stadium represents the perfect opportunity to continue his progression.

He said: “When I knew I was coming home from France, Lee [Greenwood] contacted me and really sold the club to me.

“Looking at the squad and the experience they have, especially in the halves, I believe it will be the perfect opportunity for me to develop my game further.

“I’m looking forward to getting stuck in and doing my best for the team.”

Dewsbury Rams head coach Lee Greenwood said: “I looked at Robbie at the end of the last season, but he made a great decision to go and play in France, and he’s been a starting player in a Carcassonne team that finished top of the league.

“He’s strong and athletic and is a good addition for us.

“We are light on bodies at the moment, particularly in the positions that Robbie covers, so the timing has worked out well.”

Welcome to the Rams, Robbie!